Continuing with our review series, here's an astrology book review...


Review of: The Dawning: Shedding New Light on the Astrological Ages 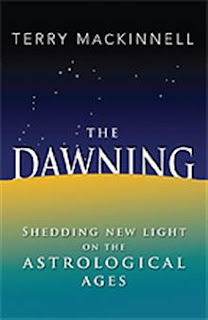 A lifetime’s earnest work, research and observation has gone into the content of The Dawning, which automatically makes it a valuable document because so much insight is distilled in one place. Terry MacKinnell has worked to balance use of a sound historical framework with knowledge of astrological techniques, whilst conveying awareness that both disciplines involve selective operation, particularly when handling complex material. For this reason the author has favoured a modern Western astrological approach, whilst observing an ancient technique from very early, observational astronomy/astrology, to re-examine the Astrological Ages, or Precesssional Ages – ie the twelve ages within the structural framework known as the Great Year.

The book may not necessarily sit well with astrologers well versed in traditional methods, or those who have ever wondered at the logic of plucking the Astrological Ages out of ancient methodology to sit rather awkwardly around the rest of the mainstream astrological techniques, like a late adopted child. Nonetheless, this uncomfortable status and lack of true integration of the Ages has, itself, hinted at a lack of overall work in thoroughly examining what they are truly about. MacKinnell should therefore be applauded for taking on such a monumental task, perhaps not least because his work lends something to historical perspective as well as making a significant contribution to astrology. The book is a great boon because, if we accept the author’s conclusions, it helps to clear up some confusion and fill certain gaps.
MacKinnell’s writing shows how the Astrological Ages provide a kind of meta-text of world events and human tendencies, not unlike astrology itself. He has the knack of bridging different worlds, such as history, astrology, psychology and human internal experience (imagination and mental projections) through a common denominator, such as the Archetype – a concept most astrologers will be instantly at home with.

The book touches upon many aspects of astrological theory and practice, underpinning an understanding of the Ages. Of notable interest are:

Vernal Point - used by Hipparchus (and his methodological error)

Visual vs mathematical astronomical/astrological techniques – the author places value and emphasis on practical observation, as the ancients did

Constellations – the fact that they were developed as a visual technique

Precession of the equinoxes – and significance of the third movement of the Earth, its wobble

Sign Cusps – rather than house cusps, which may have a firm basis in traditional astrology but no place in an understanding of the Ages

Retrogradation – the fact that the Ages work backwards through the zodiac

Quasi Ages and Age Pairs – which together provide a situation analogous to the lunation cycle.

There are also three appendices, covering historians’ perspectives, zodiacal archetypes and the somewhat daring rectification of the Aquarian Age.

As the subject matter is vast, the entirety of this volume is quite dense. I had initially thought this was going to be a book to zip through, adding a little more knowledge about past, present and future events. It has turned out to be an intriguing read, which inspired me to keep reading and really take on the relevance of the Astrological Ages. In the explanatory sections the author often writes with a marvellous use of analogies and metaphors, which help what could, at times, be a dry and difficult subject become lively and within the reader’s grasp. I especially liked the description of how an astrologer attempts to create a 3D reality from the limited, 2D reality of the chart, which aptly captures the reality of the struggle that many practising astrologers experience in trying to make sense of people’s lives from a diagram!

One of the greatest achievements of the book is to explain why there is so much confusion around which age we are currently in: the Aquarian Age or the Pisces Age. MacKinnell explains that the name by which the Age is known reflects qualities that are not usually fully realised or observable until quite a long way into the cycle – possibly around midway the baton is passed to the relevant sign from its predecessor (moving backwards due to retrogradation, so that, for example, the Pisces Age gives way to the Aquarian age). The fullness of what the Aquarian Age is really about, however, does not come through until towards the end of that ‘Pisces-Aquarius Age’ cycle, which he argues runs from around 1433 – 3574 CE. Earlier Ages are discussed in depth, with convincing historical evidence shown in the form of events that correspond with the archetypal meanings of the Ages. Clearly there is a vast knowledge of history here and the correspondences seem persuasive; for example, the focus on writing and education in the Gemini Age (framed as the Gemini-Taurus Age in the author’s pairing system). The need for financial accounting during this period fostered the development of writing – which seems to powerfully link the archetypes of the two signs together.
In a book that focuses on history there is necessarily a lot of information concerning the past. There is also a chapter devoted to climate change and another focussing on forecasting the future. The author is at pains to clarify that the exact details of the future cannot be mapped out, any more than we can easily find the truthful, 3D version of someone’s life, experiences and future conditions from the 2D situation of the birth chart. However the rise and fall of civilisations can be mapped around the Age-Decan cusps and a number of potentials can be indicated – although events in future cycles won’t be identical to those of the past, not least because history does not repeat itself. Equally, connections across astrological cycles are always slightly different, in totality, as they go forward.

The Dawning is extremely well annotated and thoroughly researched, due in no small way to the author totally embracing his subject over many years. This is not just some dry tome of academic theorising and soulless pulling together of floating ideas; instead, the author draws you into an explanation of why there’s been a problem with the existing theory around Astrological Ages, how the ages are sub-divided and why they are significant. The book also has a good index and bibliography, with references that made me instantly want to read more. Hamlet’s Mill, Astronomy before the Telescope, Babylonian Star-Lore and Cosmos and Psyche all leapt out as texts not to be overlooked by anyone interested in archetypes, mythology, astronomy and the bridging of ancient and modern astrology. It could be argued that The Dawning does for the Astrological Ages what Richard Tarnas’s Cosmos and Psyche has done for planetary archetypes and transits. The Dawning is a brave book and a carefully considered contribution to a previously under-developed area.

Terry MacKinnell is in the process of writing a follow-up volume, homing in on the sub-divisions of the Ages. I am looking forward to reading the finished product.

Comments are warmly welcome on this blog, however, we do ask that you please refrain from comments that contain:

• Advertisements or referral links
• Links to other blogs or websites

Thank you for your understanding and for helping to keep Celestial Spot a spam-free zone!

The Story so Far The discovery of Prince Rogers Nelson’s death the late morning of 21st April 2016 at his Paisley Park home in Chanhass...

Promote your Page too

Celestia
Surrey/Hampshire, United Kingdom
My professional practice is down to earth and compassionate, whilst my background is academic. I write, edit and provide non-fiction manuscript assessment services for authors in the Mind Body Spirit and Health fields. At http//mindbliss.co.uk, you will find articles, reviews and the option for professional astrology and tarot email readings, alongside mentoring services. Comments directly related to blog post content are welcome at CelestialSpot and are posted at the editor’s discretion. Celestia is a pen name.