Today, the seasons are transitioning - and in the UK this is more marked right now than at the Spring Equinox itself, as our clocks have "gone back" and the evenings are visibly lighter for longer.  So I want to talk about a transition number in the tarot.  It is number Six.  Firstly, the previous number, Five, reminds me of being on a see-saw.  It represents a midway point in the Minor Arcana of the tarot; a point from which we can roll back, stay static or move forward, possibly in a new direction.

Six is the actual step forward.  Six is when we have the impetus, or sense of safety, or feeling of a 'green light', which is telling us and showing us that we can go ahead.  So if Sixes come up in your reading for yourself or another, it means some forward movement is on the way and that, generally, it will be good.  This is perhaps most obvious with the Six of Wands, one of the keywords for which is 'victory'.  Or with the Six of Swords, which indicates a journey to a safer place, usually after a period of stress, strife or difficulty.

Bearing in mind that the Six of Cups is often linked with the past - past places, past contacts, etc - does this hold true for that card?  Yes it does.  At least it does if you're seeing several Sixes in the reading and/or if other cards are pointing to forward motion and change - say The Chariot, The Fool or The Wheel, from the Major Arcana are showing up.  Or one or more Sixes appear in the spread of cards.  Then you can be fairly sure that this is the case.  The Six of Cups, in particular, may be saying that a connection with the past will help to pivot you forward to a new future. 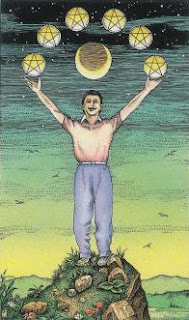 The Six of Pentacles is an interesting card, because it suggests doing more financially and work-wise. I think it's a card that warns to consider the choice carefully because, whilst success may be promised, there can be the risk of overburdening. I use the Cosmic Tarot for some of my professional tarot readings and this is especially obvious in the imagery on that card - a man holds out his arms with the six Pentacles between them, rather like a juggler. If those arms go any wider he might find he drops one of the Pentacles! So it's a card about limits as well.

We can also sometimes think about the Six as an actual measure of time, of course. We may need to think about the unit of time - Six years, months, weeks, etc.  And as to whether the figure six runs from the current time or a past time.  In a recent client reading two Sixes appeared in the Celtic Cross tarot spread and, after discussing the client's life context a little, it became clear that the time period would be measured from when she had lost someone important in her life.  The Sixes here were showing a transition forward after a period of bereavement.

If you have experience of, thoughts on or questions about working with the Sixes in the tarot, I'd love to hear your comments, here on the blog!

For those who have been following this blog, it's been a while, I know. Celestial spot has been publicly quiet but only because Celestia has been hard at work 'in the ring', as it were! The desire to write is very powerful, though and I think the blog will soon have new life because of this. Posts may be a little shorter sometimes, but better a little than not at all, we figure - and hope you agree. We hope you enjoy the latest!  Happy Easter (or your favoured festival, at this time of the year) to all.

Celestially Yours
Posted by Celestia at 11:59

Comments are warmly welcome on this blog, however, we do ask that you please refrain from comments that contain:

• Advertisements or referral links
• Links to other blogs or websites

Thank you for your understanding and for helping to keep Celestial Spot a spam-free zone!

The Story so Far The discovery of Prince Rogers Nelson’s death the late morning of 21st April 2016 at his Paisley Park home in Chanhass...

Promote your Page too

Celestia
Surrey/Hampshire, United Kingdom
My professional practice is down to earth and compassionate, whilst my background is academic. I write, edit and provide non-fiction manuscript assessment services for authors in the Mind Body Spirit and Health fields. At http//mindbliss.co.uk, you will find articles, reviews and the option for professional astrology and tarot email readings, alongside mentoring services. Comments directly related to blog post content are welcome at CelestialSpot and are posted at the editor’s discretion. Celestia is a pen name.